Gorseddau and Prince of Wales Slate Quarries, Railway and Mill

[at the heart of these lonely hills, this is the fairest of all valleys]

What’s the connection between this lonely, beautiful landscape, and the slate industry?

Both the Gorseddau and Prince of Wales quarries were developed between 1850 and 1870, the “Golden Age” of the slate industry in Gwynedd. Their development testifies to the fact that everyone that invested in the slate industry expected to make a fortune. Huge sums of money were invested in these two quarries from 1850 onwards. But both failed within a few years of opening, because of the poor quality of their rock. 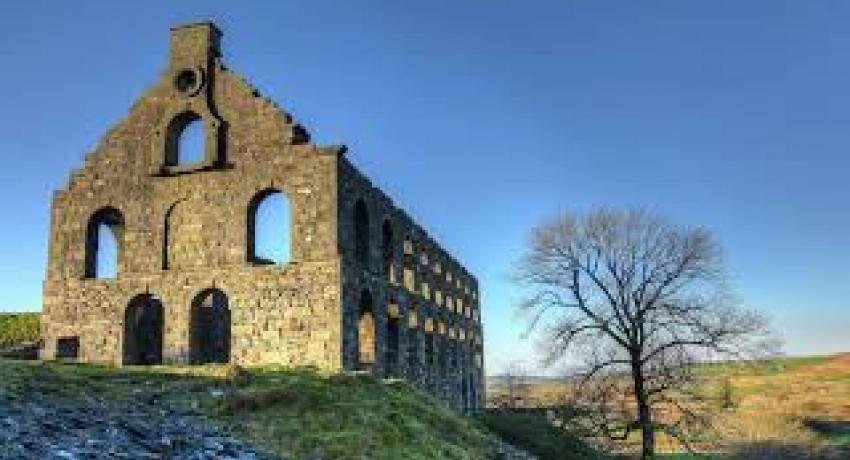 Both quarries – Gorseddau and Bwlch y Ddwy Elor (the latter called rather grandly “Prince of Wales” by its owners) – are good examples of how slate quarries were developed in the mid 19th century. After they closed, their workers left, their railways were dismantled, and silence returned to these hills.

At more successful quarries, evidence of most of the original development has been worked away, as the quarries developed and were modernised over the succeeding years. But here, original developments and buildings can be seen as they would have been at the very beginning.

Local people take pride in both quarries and it is this, along with the care of the National Park Authority, that has assured the remarkable survival of archaeological evidence here.

As at Penrhyn Quarry, Bethesda, galleries or terraces have been used to develop Gorseddau Quarry.  Each of the 8 galleries has survived, along with their splitting and blasting shelters. There are barracks here as well, where single quarrymen would have stayed overnight.

Seven galleries have been developed, but it’s also thought that there were plans to work underground. There are barracks, as well as two slate mills. The mills were designed by John Francis, manager of the Penrhyn Quarry, who went on to develop similar structures at that quarry from 1864 onwards.

Railways from both quarries met and were served by a narrow-gauge line to Porthmadog. The quarry railways had important differences. Brunlees and Fox - who designed railways in several countries - built the line to Gorseddau in 1857. This was of a high standard, designed for horse haulage. In comparison, the line to Prince of Wales quarry was designed for use by steam locomotives and built by a local man, James Davids of Caernarfon, to a far lighter standard. Very little use was made of both railways. Along their route lies one of the most remarkable buildings in the history of the slate industry.

Ynysypandy Slate Mill was built for use by Gorseddau quarry and was active between 1857 and 1866. It is an imposing building, inspired by foundry design, reflecting the background of its investors. Its machinery was powered by a water wheel, with slabs arriving at an upper level.  After the quarry closed, it is said to have been used as a community hall for some time.

The village of Treforys, between Ynysypandy and Gorseddau quarry was developed in the 1850s. Eighteen  pairs of two roomed cottages were erected on sour, unsheltered marshland. The manager’s house was nearby. This is a planned village, possible inspired by the village of Mynydd Llandygai in Dyffryn Ogwen. The name is a reminder that a local banker, Richard Morris Griffith, helped to raise capital required to develop the quarry. This must have been a challenging place in which to  live and smallpox was reported here in 1859.