[In face of all the hardship/that’s been, or still to come/grant me thy help, as ever/to shelter in thy hand]

This area is centred on Dinorwig Quarry. It’s an astoundingly beautiful landscape, with Yr Wyddfa (Snowdon), Llyn Padarn and Llyn Peris at it's heart. Dolbadarn Castle has guarded this valley since the 13th Century. As in Dyffryn Ogwen, the wealth of an aristocratic landowner underpinned development of the quarry – in this instance, the Assheton Smith (later Duff) family of the Faenol estate. The rights to this land were granted by influential friends at Westminster in 1806. 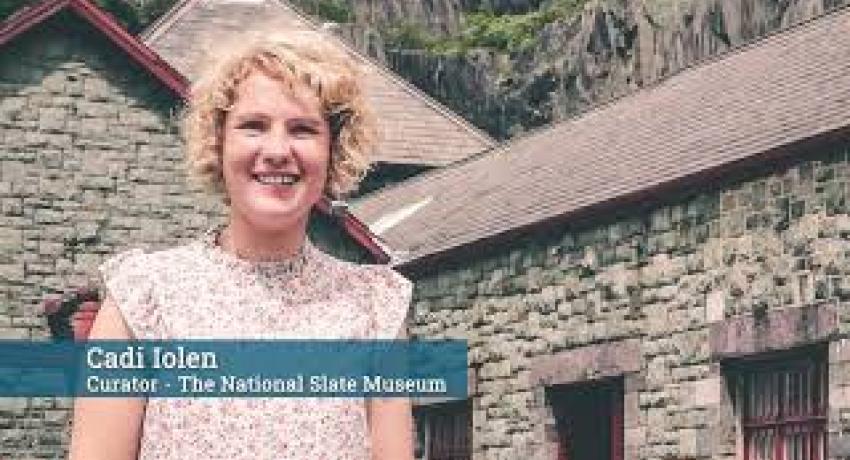 In its time, Dinorwig Quarry was the second largest in the world, and was worked between 1787 and 1969. It contains over 30 galleries, or terraces, each linked to a rubble tip. Each is also linked to one of the inclined railway systems which are a feature at this quarry. These were in use almost to the end. After closure in 1969 the site was soon purchased by a company which went on to develop a hydro electricity scheme here. This meant that almost all structures survived. The Australia gallery, with its huge mill building, along with its electrically powered equipment dating from the 1920s, is a good example.

The well-designed engineering workshops at Gilfach Ddu, powered by a massive waterwheel, are an expression of confidence and pride. All the machinery, throughout the building, was at one time powered by the largest surviving water wheel on the British mainland – and it still works. The buildings and their content are a treasure house of the machinery, the skills, and the resources required to operate and maintain a huge quarry. The workshops were reopened in 1972 as one of the branches of the National Museum of Wales. Visitors can see displays of slate splitting and trimming skills and nearby one of the inclines at Vivian quarry has been restored to working order. There is also an opportunity here to enjoy a train ride on the steam operated Llanberis Lake Railway along part of the 1840s built course of the quarry’s second railway.

Originally, a network of purpose-built roads was used for transporting slate. These led down to the shores of Llyn Padarn, and later down to the Menai Strait.

Innovation was important, and in 1825, the quarry’s first railroad was opened, inspired by Penrhyn Quarry’s 1801 tramway. Then, in the 1840s, a far more sophisticated railway was opened, running along the shore of Llyn Padarn. This was the first of the slate quarry railways to use steam locomotives. Its designers had learnt about the technology while working with Robert Stephenson and Isambard Brunel, both renowned engineers.

A number of well populated, characterful villages developed in the vicinity of the quarry. Plots of land were leased for the construction of homes for quarrymen, along the road leading to the upper quarry. The course of this road, and then the quarry’s first railroad, led to the development of the villages of Deiniolen and Clwt y Bont. Homes here were owned by the quarrymen themselves and not under the influence of the quarry owner. But the Gothic church nearby would be a constant reminder of that influence.

The quarrymen who travelled from a greater distance, perhaps from Anglesey, would live in “barracks”. This is the Anglesey barracks, in use until 1937.

This was built in a prominent location above Llyn Padarn and was intended to display Mr Assheton Smith’s fatherly influence. The quarry surgeons made innovative use of new techniques, such as x-ray equipment, as they treated men injured at the quarry.

It was this paternalistic, stifling, approach that presented a challenge to the quarrymen as they set about establishing a Trade Union. Holding meetings here at Penllyn meant that they were well away from quarry owned land. The North Wales Quarrymen’s Union was established in this valley in 1874, one of the first trades unions in Wales. They would face immense struggles as they fought for justice for their members. This spot is now called Craig yr Undeb [The Union Rock].